Welcome to the Encyclopedia Calibran

This wiki is the guide for the world of Calibran. Here you will find information on the world and its inhabitants. The writers use this page as a reference, so please be careful what you change! We'll work hard to make sure there are no spoilers within these pages.
News

12/26/15 - The start of saga is being delayed, unfortunately, as we work on a few issues on the backend. It will most likely be launched in a few months. In the meantime, more of Calibran will be available here on the wiki to explore. You can also head over to ChorniclesofCalibran.com for blogs, free stories, and more announcements!

10/23/15 - Our first novella, The Blue Dragon War, is receiving rave reviews! In the first few weeks it was available, it shot up to the top of its categories on Amazon Kindle.

A prequel to our upcoming saga, The Blooding, is available for free on ChroniclesofCalibran.com. Check is out for your first taste of Calibran, and our heroes' adventures!
Featured Article 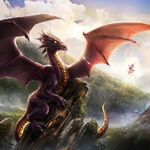 For centuries, Dragons were the undisputed lords of Calibran. Their scales were better than any mundane armor, and their teeth and fangs were more than a match for swords or spears. Dragons' wings gave them mastery of the air, and their adepts grasp of magic was unsurpassed.

They believed that the world was forged from the breath of a Dragon God, made for their pleasure and given over into their care. The lesser races were their servants and their playthings.

For thousands of years, the Dragons ruled the continent of Calibran. Wielding magic and an intelligence few could match, their whim was law, and the lesser beings were merely playthings and game pieces.

But not everyone was content to be ruled by the dragons.

The minotaurs of Kehlaktur are strong, fierce and independent. They boast that their city needs no walls to keep them safe, only the strong arms and brave hearts of their warriors. And up till now, they have been right.

They have something the Blue Dragon wants.

Glaurax the Deep comes to the minotaurs with an offer: accept his rule and he will transform them into a mighty army and make them masters of all, subject only to the dragon.

But, the minotaurs value their freedom too highly to be ruled by a dragon tyrant. Now, the dragon is coming to take by force what the minotaurs would not give willingly. With the aid of madmen and blood magic, swords and axes, the minotaurs will fight to stay free.

When you’re fighting a dragon, though, is all that enough?

The Blooding - Available for free at ChroniclesofCalibran.com

The Blooding, a fierce and brutal ancient ritual undertaken by all prospective dark elf of the forested night city of Talashtar, takes Nethala, a young and tenacious hopeful on the first step of an incredible journey.

The cruel and isolated society of the dark elves breeds only the strong.

A trial that has stood in place for centuries the blooding is only for the fiercest of warriors where a simple wrong turn, a judgment of error or a moment of arrogance could be the matter between a glorious life or a terrible death.

When new adversaries appear, and the game is changed, a centuries old tradition uncovers a deeper plot, one that could set Nethala on a very different path than that of her forebears.

With sword and stealth as her only allies, Nethala heads out into the unknown in search of her prey.

Chronicles of Calibran is a an experiment in fantasy storytelling, an epic that is a collaboration between a team of writers and world builders. It is a fantasy series, but one that will be serialized over the next two years. The story will follow a number of different characters as they adventure, fight, and explore the world we have created.

Geography - The places, cities, and environments that make up Calibran.

Races - Here you can find more information on the diverse peoples that inhabit our world.

Flora and Fauna - Plants and animals of Calibran.

Writers - Learn about the architects of Calibran, and the authors who write the heroes' adventures.

Characters - The heroes and villains of the saga.

Retrieved from "https://calibran.fandom.com/wiki/Calibran_Wiki?oldid=4656"
Community content is available under CC-BY-SA unless otherwise noted.